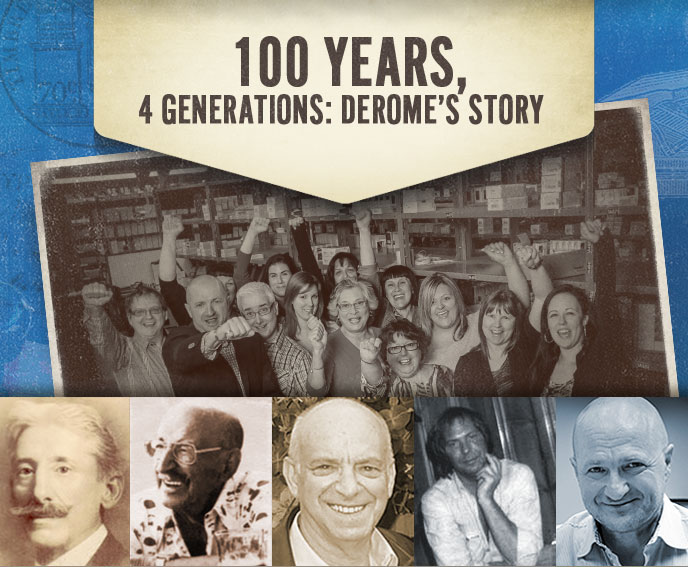 A 100 years ago, when the world was entering the early stages of its first world crises, Alphonse Derome was starting his business: A. Derome. As the story goes, it all started when Alphose was laid off one summer. Every year, this would happen: he would be laid off for the summer and then be rehired the next fall. After many years of this, he asked for a couple more months off in order to build his house and set up his family. His employer agreed, even going as far as to tell him that his job would be there waiting for him when he got back. Unfortunately, things did not go as planned. When Alphose came back to work the following fall, he was told that he had been replaced and that they no longer needed him. Alphose insisted but nothing could change his employer’s mind and he was then told to leave.

Standing up for himself and mostly due to his pride being hurt, Alphonse told his employer “If you don’t rehire me, I will start my own business and I will do everything in my power to compete with you in every single way”. His employer, amused, told him that he would then contact all his suppliers to make sure nobody would have anything to do with him. This was all Alphose needed. A. Derome was born.

Alphose Derome managed his business for 30 years specializing in printing and marking devices. With modest means and limited resources, he even made it through the great depression of 1929.

In 1940, Alphonse’s son, Conrad Derome, took charge of the company in order for it to grow. Unfortunately, tragedy happened. A fire destroyed the building and all the equipment. Added to the fact that he couldn’t afford insurances, nothing could be salvaged. But Conrad took it in stride and, against all odds, he rebuilt everything and revived A. Derome stronger than ever.

Located then in the Old port of Montreal, Canada’s business center at the time, A. Derome made stamps using plaster molds, wood and lead monotypes and used letter press to print business cards, letter heads and others printing materials.

In the 50’s, Jean-Pierre Derome and Serge Derome continued A. Derome’s accomplishments as, respectively, president and vice-president. Innovations were in the air, so they acquired a typesetting Ludlow machine. In the 70’s, they decided to stop offering printing services mostly due to the financial burden of the main method of printing, the offset press, and concentrated on marking products.

In 1973, the young Stephan Derome, A. Derome’s actual president, started to take interest in the family business and in 1976, decided to start working full time for A. Derome.

A few years later, in 1979, the company’s lease was up for renewal and since the commercial inclination of the Old Port was changing towards being a tourist based attraction, Jean-Pierre and Serge Derome decided to move to Laval’s industrial park in a 3500 square foot building. The company is still located in the same building but now occupies more than a 1000 square foot. Afterward, changes became a yearly occurrence, starting with the acquisition of a Power View 10 Compugraphic. They now realized that in order for the company to expend they needed to increase their productivity. For example, all the Ludlow machines were replaced by a phototypesetting machine saving them time and increasing efficiency.

Shortly after, A. Derome joined the US Business Stamp group, positioning the company ahead of its competitors. This membership to the USBS allowed Stephan Derome to take part in the International Marking & Identification Association (IMIA) conference. This event marked a major turning point for the company allowing Stephan Derome to rub shoulders with the biggest names in the business, the most important suppliers and multiplying business opportunities.

Two years later, Apple made its debut and A. Derome jumped on the bandwagon and entered the computer age which revolutionized the way stamps were being produced and manufactured. In 1988, Stephan Derome became president of the company. This decade also saw the start of a product that would impact the marking industry by its efficiency: the self-ink stamps. The young president didn’t miss this opportunity, which now represents 80% of the company’s turnover Following clients’ demands, A. Derome added engraving to its services. A decision that shines light onto the business core strategy: offer the clients all they desire in terms of marking services

After a century of uninterrupted activities, the company is still owned and managed by the Derome family.

A. Derome: A wonderful example of resilience and perseverance, a true entrepreneurial success story.